WOW!!! When you walk into the library just north of Bonner Rd on Main street in Wauconda, you see a pleasant library but looks like just about every one you’ve ever seen. Then you take the elevator down, which we did because Matteo loves riding in them, and you are transported into a magical world of books, games, fish tanks, touch screens and more. I remembered from visits in the past (at least 5 years ago with my daughter who is now 12, that this library had a good kids department, but they are clearly striving to be a cut above the rest for sure.
They boast a lite brite wall with 6 inch sticks that the kids insert into the wall and watch light up. They have a giant touch screen game that acts like a wall sized iPad. They’ve got a gaming area with Wii and Xbox 360, as well as a arts and crafts area for some messy play.  Then Matteo’s favorite item and seemingly the most popular, there is a large colorful plan with knobs and switches to simulate flying, that also has a nice slide out the tail end. Like WHOA!
And in case you think I forgot, they have a great books section as well. I’ll admit the books in this library are definitely not the focus. So more of a children’s museum than a library? Why get caught up on labels. Let’s just say this… THIS PLACE IS AWESOME!
See Other Reviews 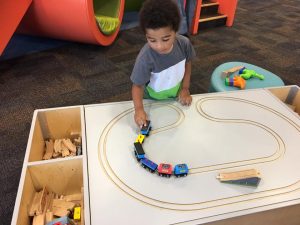 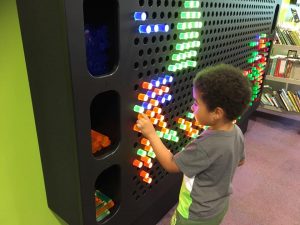